Adobe Lightroom’s Develop module has a powerful Curves tool that can correct both the tone and color of your image.  The Curves Tool in Photoshop is a bit more sophisticated, but the Lightroom version can do a good job on most images.

I open this image of a cheetah and immediately notice a color cast toward blue and a lack of contrast.  The first instinct might be to grab the White Balance tool,  but we can make a better adjustment with Curves.

To concentrate myself on just the tonal range, I move the Saturation Slider all the way to the left to -100. This gives me an undistracted view of the tone of this image. 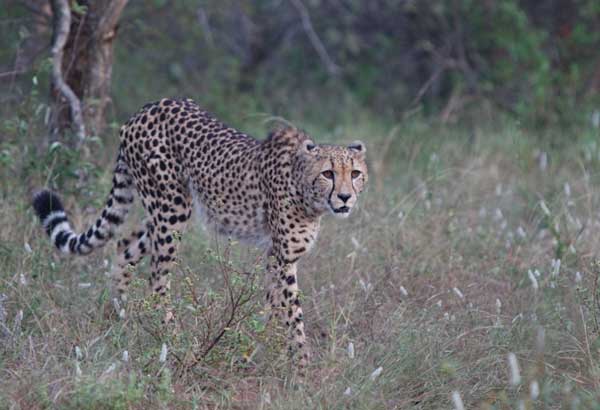 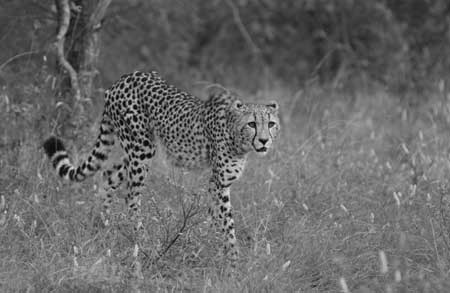 The Curves Tool has 4 predefined regions with sliders: Shadows, Darks, Whites, and Highlights.  They are set at equal spacing according to a scale of 100.  Not all images fit this so you can adjust the placement and thus the definitions of the regions.

We need to find the darkest and lightest point in the image then set our definitions of Shadows, etc so we can use the sliders instead of doing all our work on the actual curve line.

Now I need to decide which part will be black . In this image, all of the blackest points will be on the cheetah with the darkest either the end of the tail, in the nose, or corner of the eye.

Pick up the Direct Adjustment tool (the circle with up and down arrows to the left of the Curve),  drag it over the image noting where on the curve the value registers.

Also look at the Histogram at the top of tool panel to watch the numbers.  I notice the cat’s right nostril to be the darkest point.  Note also the range on the curve where all of the spots register. I will use all of these (except the small spots on the forehead) to define “Shadows” for this image. 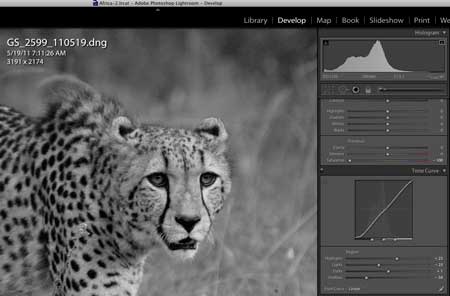 I want the left tear pattern to be the brightest limit of the “Shadows” so I drag the left most marker under the curve a little to the right.

The value numbers for the dark areas show that none are a true black.  Drag the slider  titled Shadows under the curve so the darkest spot in the nostril falls to the corner of the curve.  You can turn on your color indicators for Black Clipping (the triangle on the left in the histogram) so you can see if you go too far.  A little loss of detail is ok.

Using these sliders are tone range definitions are easier than using the Direct Adjustment tool or working directly on the curve.

Here again, pass the Direct Adjustment Tool over the image on the light parts while watching where on the curve it registers and the numerical values.  There are white spots on the face, but using the numbers displayed in the histogram and curve I find a spot on the leading leg to be the brightest, but not true white.

Once again I want to change the definition of “Highlights” to suit this image. I want to adjust all the brightest areas on the cat (and this will also include a few tips of the grass) together towards true white. Use the measurements along to curve to decide where to move the slider.  I decide the darkest place I want to include among my “Highlights” would be the area just over the right eye.  I move the slider to the left to include part of this fur coloration. You can use the Direct Adjustment tool by placing it on a spot of highlight and dragging it up to make the tone brighter or move the slider to the right. 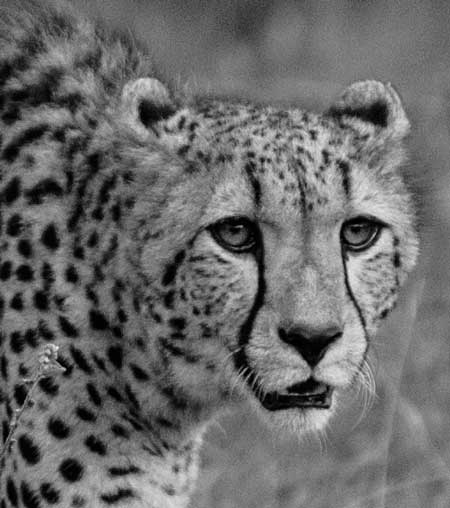 Now the view the image full size looking at the subject and details in the foreground to decide where you want to create more contrast.  There is some detail in the grass to bring out, but more important is the color variation of the fur on the face.

Use the Direct Adjustment Tool on the image to push up and down on the tones on the face for very fine control over the curve.  Once you are more familiar, will be able to work right on the curve and fine tune the sliders. Be careful not to push too far, this should be subtle.  Follow up this adjustment with a move of the Clarity slider to the right.

Return the color to the image by putting the Saturation slider back to 0. The color is much improved, but still has 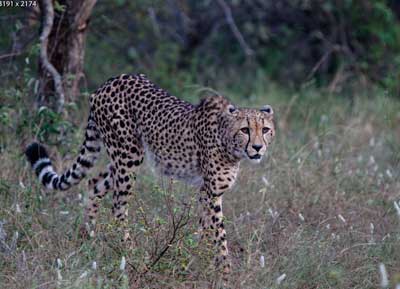 a cool, blue cast.  Confirm this by passing  the curser over areas of neutral color (white and black ) while watching the number values in the Histogram. The grass looks too blue as well.

Since the color cast seems to be all over and present in all tone levels, you could use a White Balance adjustment, but  using the Curves (and refining with the HSL Color controls later) will give you much more control.

Convert your view of the Tone Curve to one where you can choose one of the three color channels. Click the little graph image at the bottom of the box and the sliders disappear.  Click the arrow next to Channel to select Blue from the list. 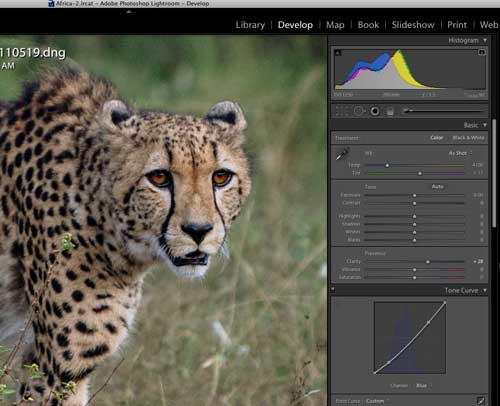 Use the Direct Adjust tool on an area of white to pull down the pull just a little bit. Don’t go as far as you think it should.  Now switch to a shadow area and pull down the blue watching the color value changing under Histogram. Go back to the light area and finish it off. For this image an adjustment in the Blue Channel is enough, but another image might require doing an adjustment on the other channels in either the shadows, highlights, midtones or all of them.

Color and contrast look much better, but perhaps I can adjust the color so as the separate the cat from the similar tones of the grass.

A Saturation adjustment works here (Vibrancy will not because what we want to enhance falls into the “skin tone” range that Vibrancy protects.). Another way is to go under the Color controls and use the Saturation and Luminance under the Reds, Oranges, and Yellows to get the look you want. 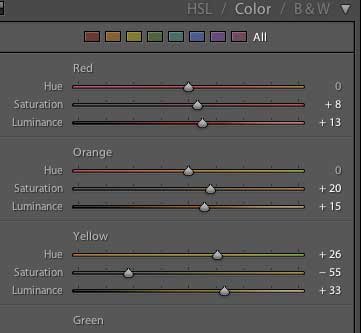 I pushed the Yellow Hue toward green to differentiate brown grass from brown cheetah, popping him out from the grass. I also brightened the yellow grass to move it tonally away from the tones of the cheetah. The cheetah is mostly in the Orange range so I saturated that and brightened the orange component of the fur a bit. The shadowed fur has some red so I did the same but subtly to it as well.

The last step would be to work on the eyes with a dodge and burn effect.