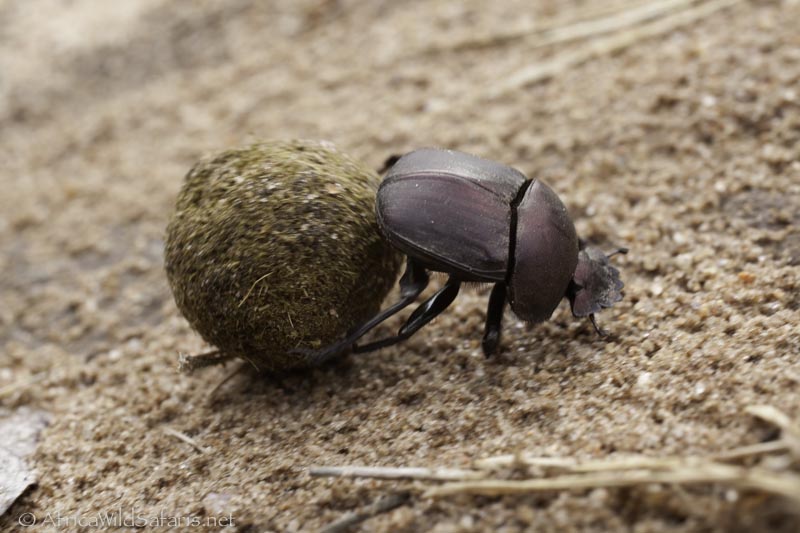 Dung beetles use their acute sense of smell to find a fresh pile of dung. Then they form it into a ball and start to roll it a safe distance away so they can eat it in an underground storage den.

This humble act helps reduce amount of methane released into the atmosphere  making them a surprisingly effective weapon in the battle against climate change.  According to a recent study, they do it by just digging in and around the dung which helps aerate the turds  reducing the amount of methane formed and released.

The journey away from the dung pile  is not without drama.  Dung beetles prefer to roll in a straight line else they risk deviating in a circle and ending up back at the pile where another beetle will undoubtably steal their ball.

Studies had previously shown that dung beetles were able to keep a straight line by taking cues from the Sun, the Moon, and even the pattern of polarised light formed around these light sources, but it was the animals’ capacity to maintain course even on clear moonless nights that intrigued the researchers. To answer the question, dung beetles were treated to a night at the planetarium where the researchers could control the type of star fields they see.  In a blackened container to eliminate any landmarks on the horizon such as trees, they were confronted by different conditions.  The beetles performed best when confronted with a perfect starry sky projected on to the planetarium dome, but coped just as well when shown only the diffuse bar of light that is the plane of our Milky Way Galaxy. They think it is the bar more than the points of light that is important.

Dung beetles climb on top of their balls periodically. It is thought this how they take their bearings. It has also been shown that the beetles will climb on top to cool their feet on very hot days.

Dung beetles have preferences for certain species’ dung so when species such as rhino and elephant decline, so do the beetles.