Though there is no hiding the stress of the long drought on the animals and plant life of the bushveld, we had excellent wildlife sightings.  The predators thrive during these conditions with so many herbivores loosing condition to lack of food.  There was hope in the first good early rains. We enjoyed the cooler than average temperatures and watched the drama of nature unfold.  These are some of ours guests and my own favorite moments from our recent 3 safari groups. 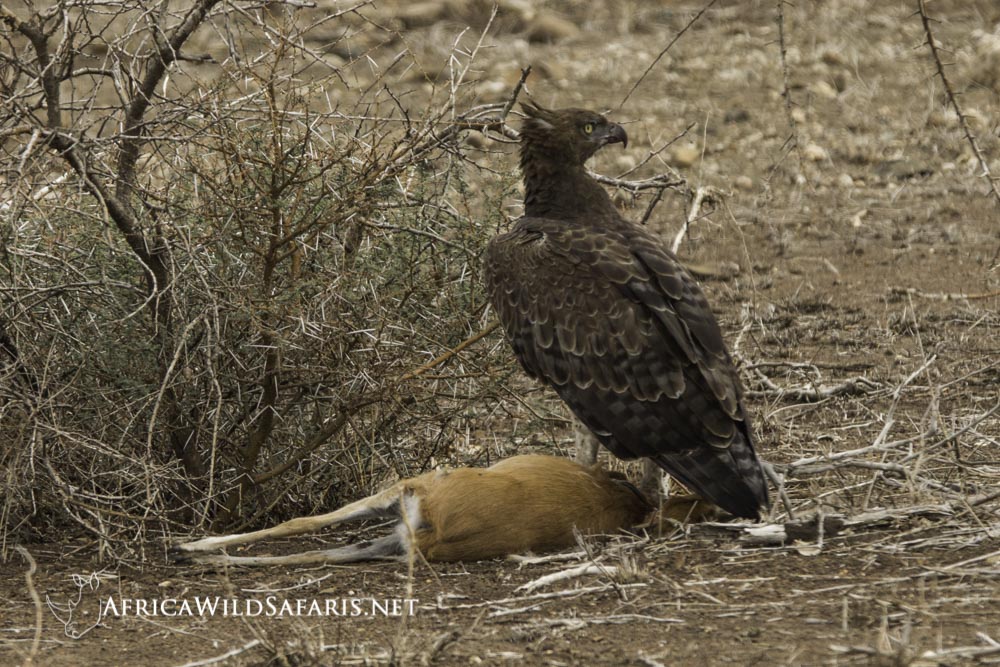 Martial eagle has made a kill

Most of our large raptor sightings are of the bird of prey scouting from the top of a tree or involved in a crowd of birds on a scavenged carcass.  The eagle was able to take down a steenbok.  The bird plummeted with enough force to knock the weakened antelope to the ground then held it in a choke hold.

Following a Leopard on His Rounds

Our trackers knew where to look for this male and we found him early in our game drive.  He is a very robust male who has obviously had success hunting lately.  We had a wonderful time seeing the daily life of this predator.

Leopards love warthogs and this one spent some time checking likely dens while listening and watching for some to return for the night.

It is possible this leopard has a recent kill stashed up a tree (his stomach does look a bit big) and thus he is only surveying territory tonight and hunting only what is easy to get.

Most times we see hyenas at the kills made by lions, or harassing a cheetah.  We had a chance to see a more sympathetic side of hyenas at a den sight with multiple pups.

The den had several cute puppies and the dominant female (mother) was very attentive and affectionate to them. The usual subadult den assistants were also there keeping the bold puppies close.

Seeing and photographing lions is always a thrill. We have seen many different  lion kills and pride groupings this year.  Observing the social dynamics of the group at feeding times is very revealing. The physical demands of eating a carcass is surprising as is the effort put into guarding the meal from vultures and scavengers even after all the lions are so full they can hardly move.  We can get very close and see every detail for different positions.

We are lucky to have many wildlife conservation and rehabilitation centres near our lodge.

It is always an educational experience for first time guests and repeat visitors like myself.  We visited an orphaned baby rhino, the raptors recovering from poisoning, and other permanent and temporary species.

Great Wildlife Moments at the Lodges

Often we don’t have to leave the lodge to have great wildlife encounters: it is all around us.  The night skies are magnificent in the near total darkness and the sounds are exotic.

One hot afternoon our guests were relaxing in the pool when giraffes came to eat buds off their favorite trees.

Our safaris are full of wildlife which will thrill photographers and those without fancy cameras. We also believe that all the wildlife needs to be presented within a context of current conservation  efforts, successes, and challenges.  We celebrate and appreciate each species of bird, insect, plant, and animal for its role in the whole ecosystem of our corner of South Africa.

Our safaris are educational, fun, exciting, surprising, and fulfilling – and some say life-changing.