To Go on Safari is to Return with  Hundreds of Stories: Predator vs Prey,  Survival, and Cooperation among Wildlife

Learning to be a Leopard

The Sabi Sands Reserve is famous for its resident leopards.  Our guests were  treated to a 4 leopard afternoon game drive.

An older female leopard called – Ingrid Dam – was watching her cub (unnamed) eating an Impala kill up in a tree, it was having a difficult time eating in the tree because of the position of the kill. The Impala kill and the young cub fell out of the tree.  We knew and the leopards knew there were hyenas nearby wanting to steal this meal should the opportunity arise.  Was the mother going to come down and take the kill back  up the tree for her cub?  We watched and waited.  Though the cub seemed to be asking for help, mother decided on tough love and stayed in the tree watching  as the cub learned to drag the impala kill back up the tree.   It was a hard and physically challenging lesson to learn, but the cub had succeeded for the first time to save his meal from those who would steal it away.  The effort involved with dragging a kill up a tree is the leopard’s way of out maneuvering scavengers. 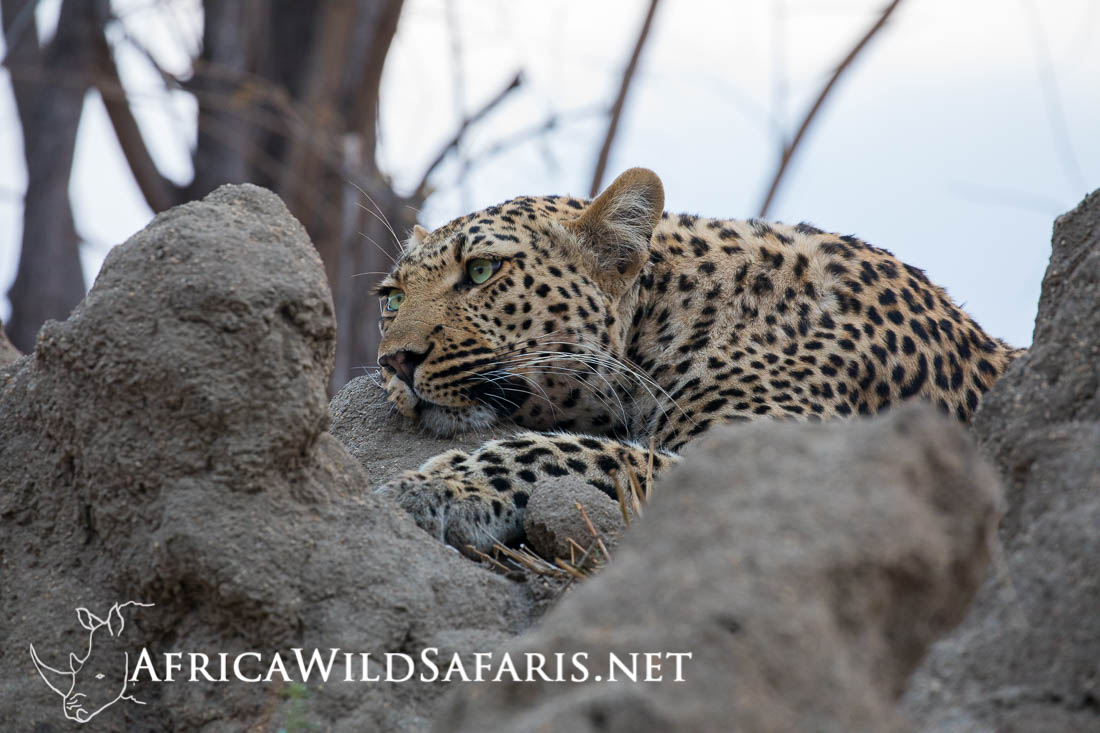 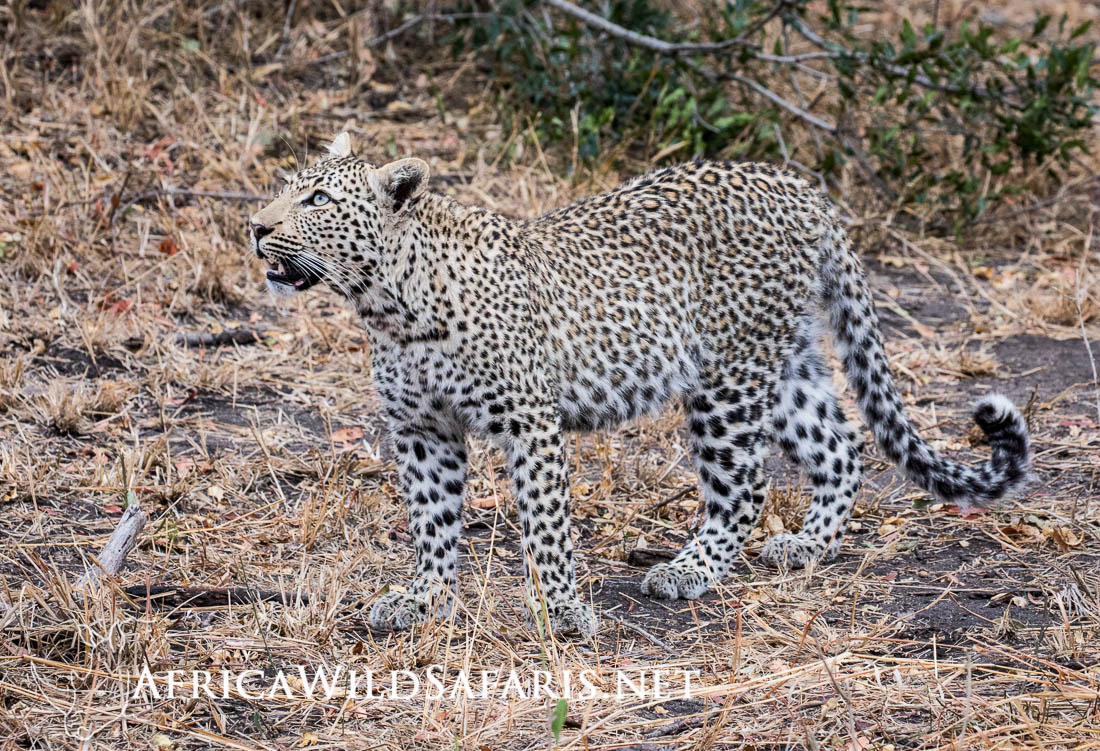 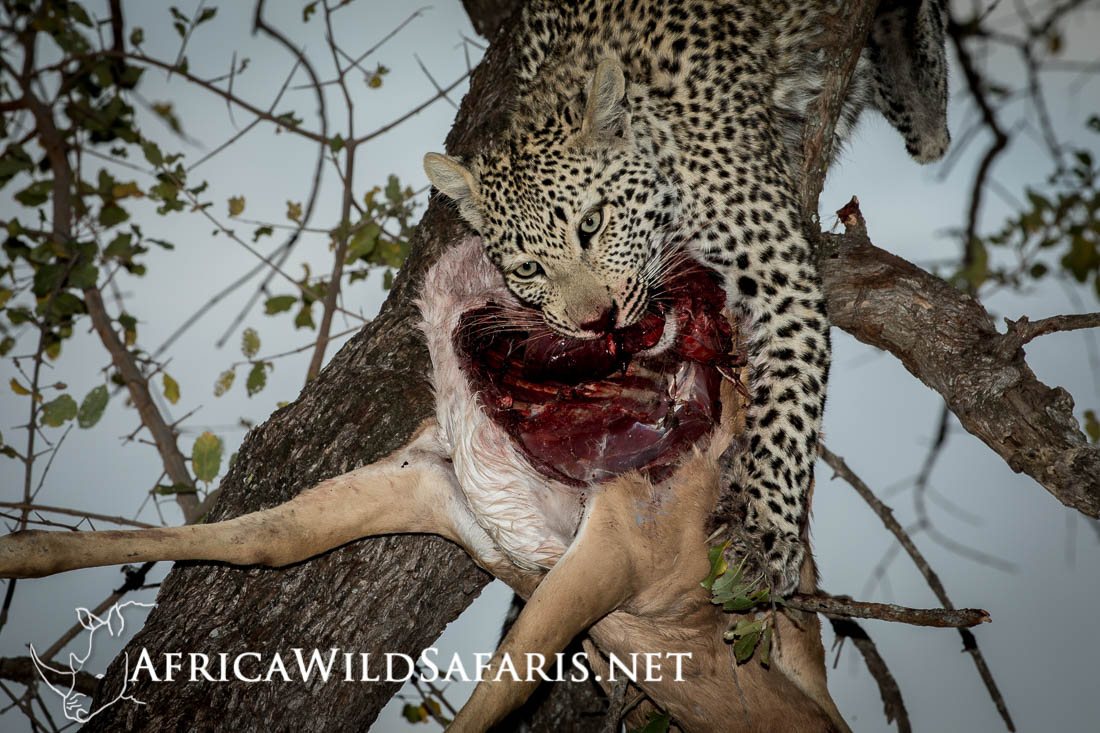 As New as it Gets – A Newborn Elephant 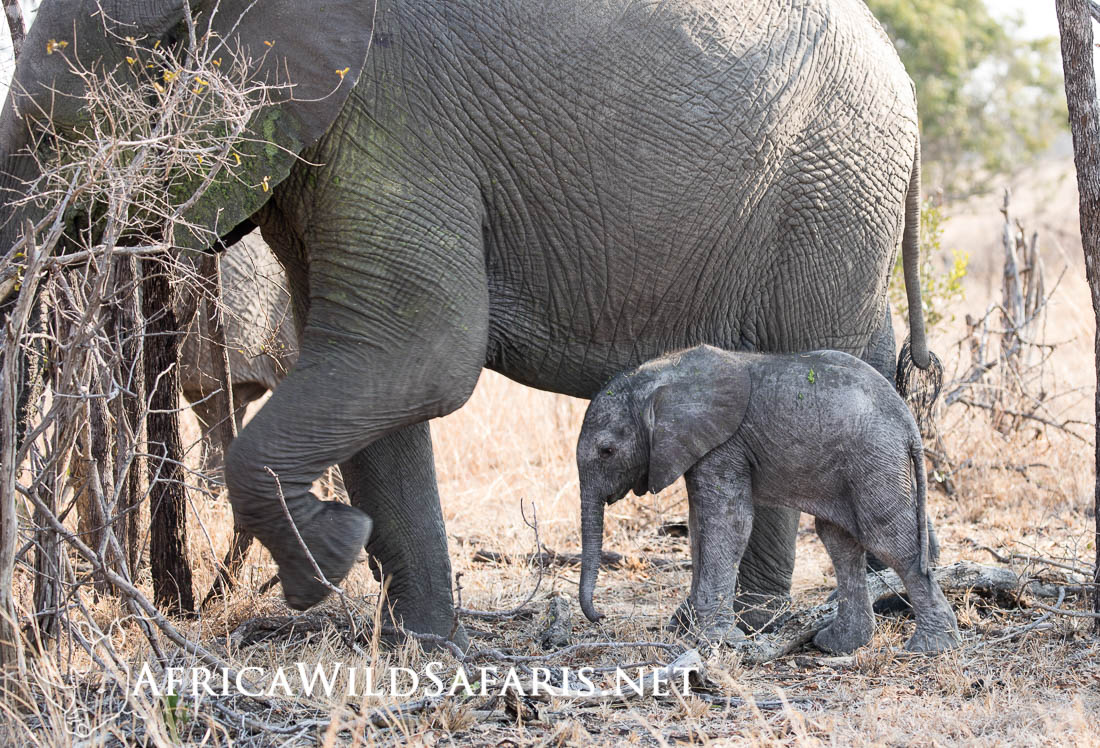 We were on a game drive on a private reserve near Kruger enjoying some great lions, a buffalo herd, and a leopard up a tree when we had a radio call from another safari vehicle about a great sighting.  We hurried over to find it was a newborn elephant calf.  At first we could not see the little one since the calf was hidden among the large legs of the mother, her sisters, and the herds older children.  They were all vocalizing and moving in small, strange movements as if dancing or chanting.  The mother was throwing dust on herself and the calf.  Soon the crowd parted and we could see the newborn.  Cute, wrinkly, and very unsteady on the feet, it was obvious the calf had only been standing for mere minutes.  We were very close and felt very privileged that the herd let us be this close and share their joy at the new arrival.  The calf tottered and fell a few times and we worried until the little one struggled to stand again. 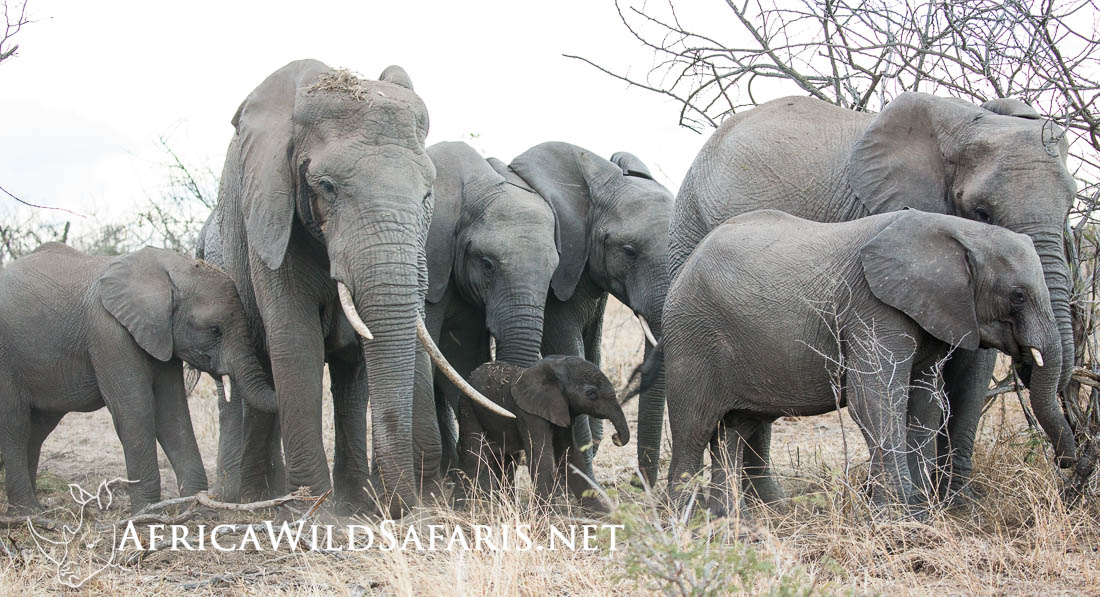 The next week, we had wonderful continuity when we spotted the herd again.  It was wonderful to see the infant prospering, healthy, and nursing. 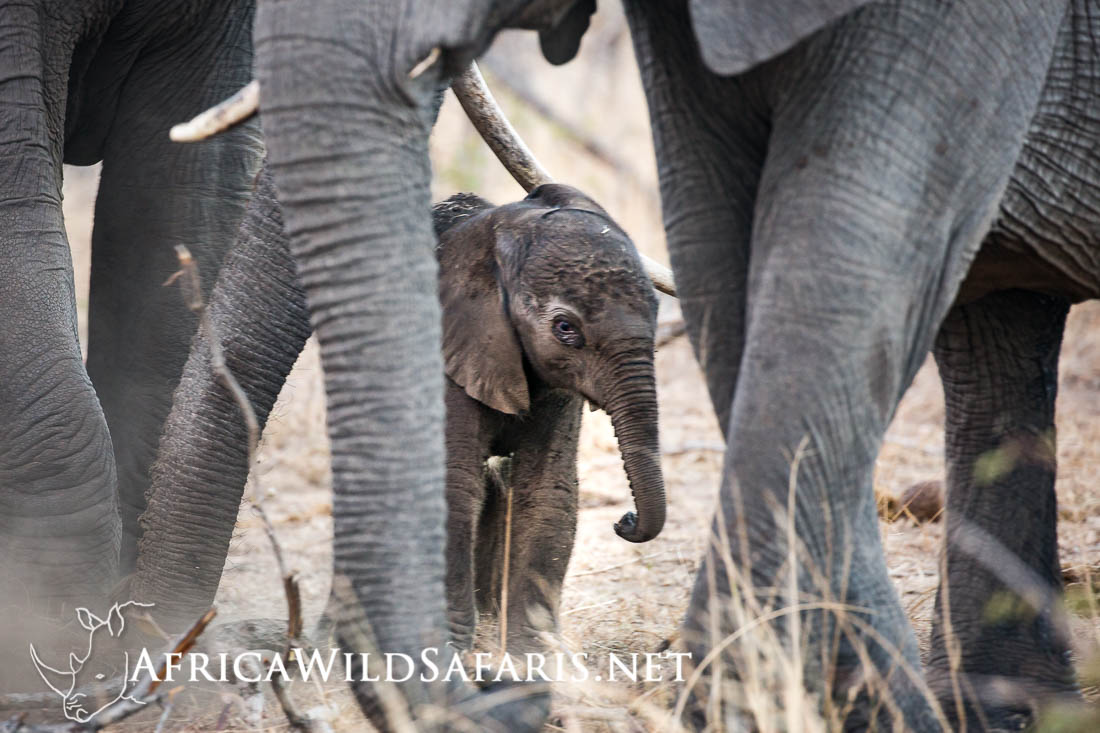 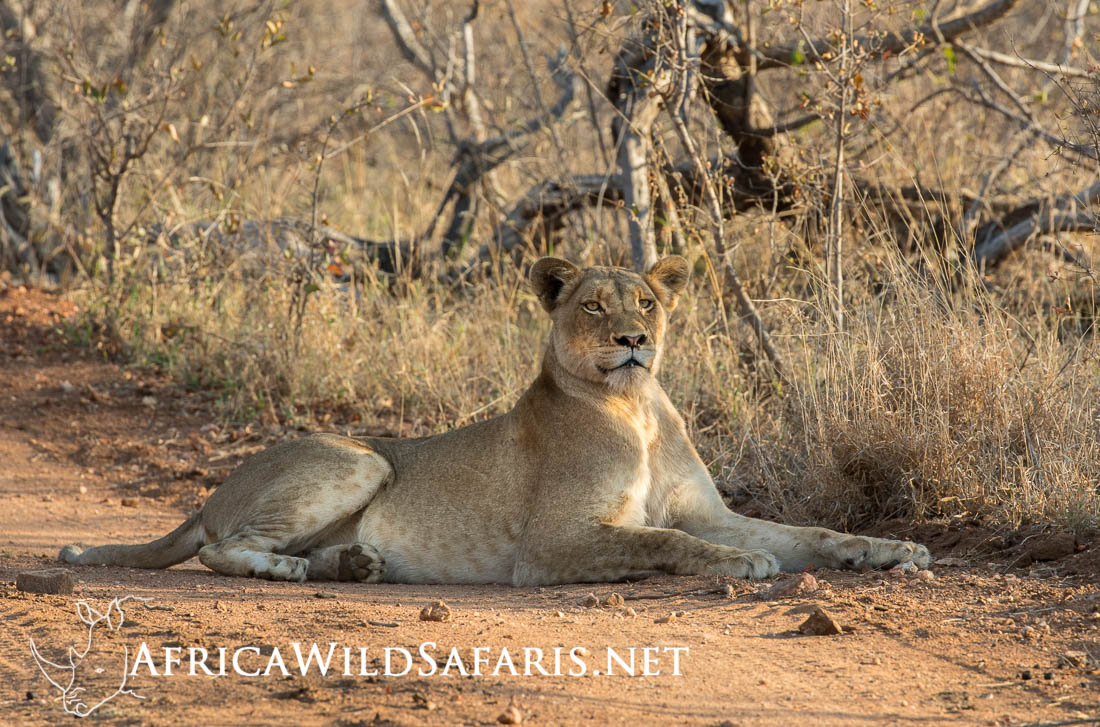 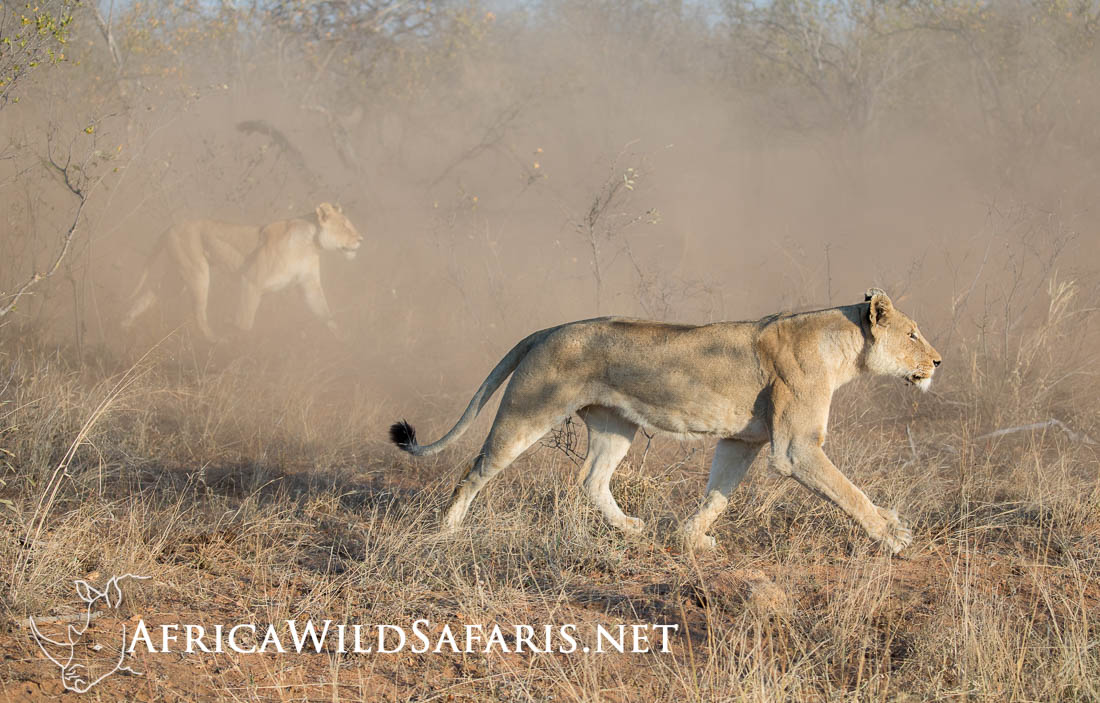 It was our last game drive on the last day of safari and getting to be the time to turn around and head back to the lodge.  It was a great drive, but about to get even better.  We spotted several female lions concentrating on a medium sized herd of buffalo. 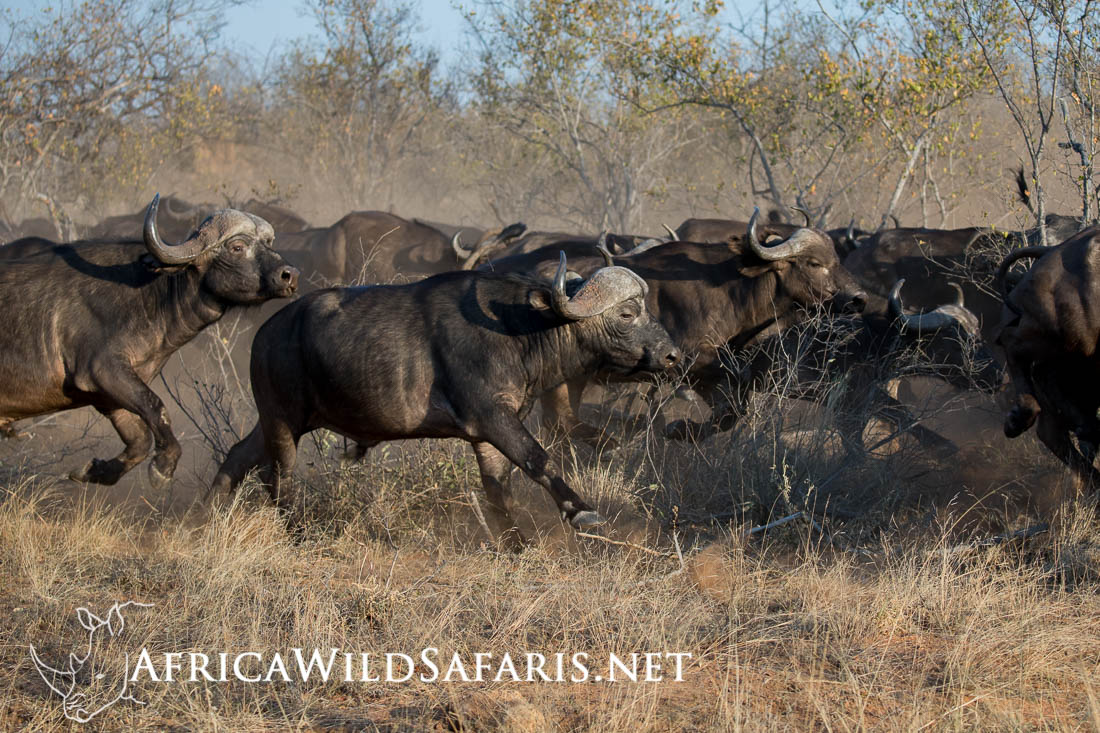 It appeared the plan was to slowly move into positions around the herd to separate certain buffalo.  The lions separately made their way around the buffalo herd. Suddenly something goes wrong  – one of the lions must have blundered – and the buffalo started to run.   Wait a minute; they are not running away, they are charging the lions!  One of them was running for their life straight toward us. 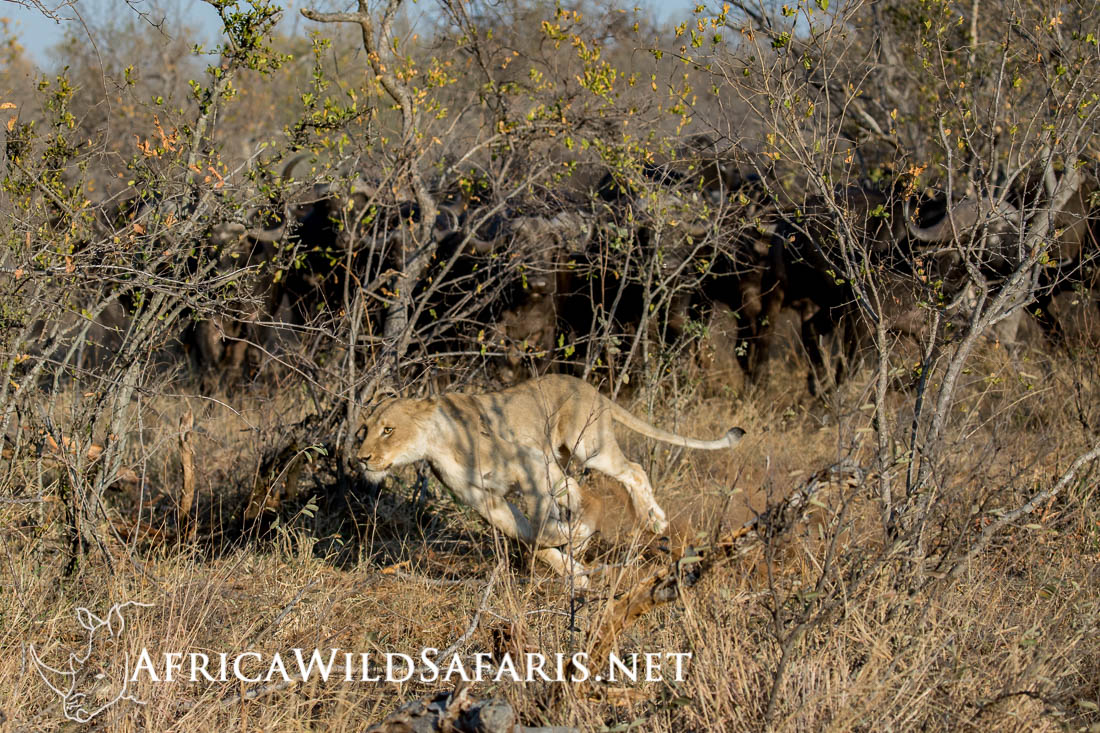 It is hard for lions to give up when things do not go to plan.  Some of the pride continued to run with the stampeding buffalo to see if there could still be a chance to salvage the hunt.  It was not to be. 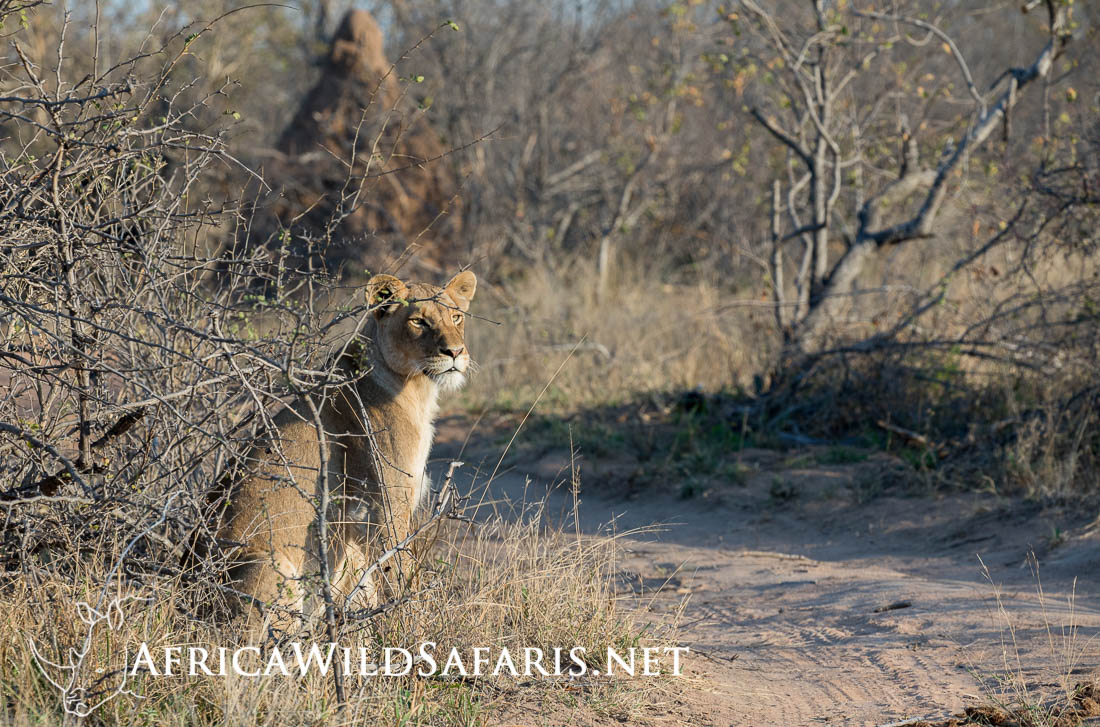 Still, it took a long time before the lionesses could let this one go – they continued to watch the buffalo herd move out of reach.

As I look through my images, my memory goes back to watching the events  unfold in front of me.  They are much more than the  best image: it is the dozen images before and after that one great image that make up the safari stories that I will tell my friends and family.  While images help to make the story real; nothing compares to having been there and witnessing it live.

Contact us about a safari  or with any questions about choosing, preparing for, and going on a safari.  It is just my wife and I but we correspond with all inquiries personally.

Or just join our newsletter list so you get trip dates, specials, Safari Reports.