Every October and November, polar bears congregate in the Churchill area to await the return of the sea ice and access to their preferred prey: the ringed seal.  This year our trip to Churchill was in late October.  The weather was starting to get snowy, but the ice had not yet formed. Numerous bears were known to be in the area.

Join my Next Polar Bear Expedition to Churchill – my last time offering this trip!

We traveled by way of Winnipeg and a flight up to Churchill.  Our group stayed inside the Churchill Wildlife Management Area at the Northern Studies Centre, a research facility that houses the scientists and their research. Each year the Centre welcomes a few visitors such as our group.  While at the Centre we were introduced to the ecofriendly facility, learned of the current research, and had a thorough orientation to polar bears in this region. It is a comfortable facility with meeting rooms, media rooms, a workout room, and we enjoyed the observation deck and night observatory dome. At times we had wildlife sightings from the windows of the Centre: a fox visited daily, a hare, birds, and a bear came close.

Our first day out was in a private van which takes us around the town area and bordering wildlife area. We learned about the impact of humans on the polar bears and the steps they take to keep bears from becoming a nuisance around human areas like the dump and in town. We were enlightened about the bear jail and how they trap and release the bears. 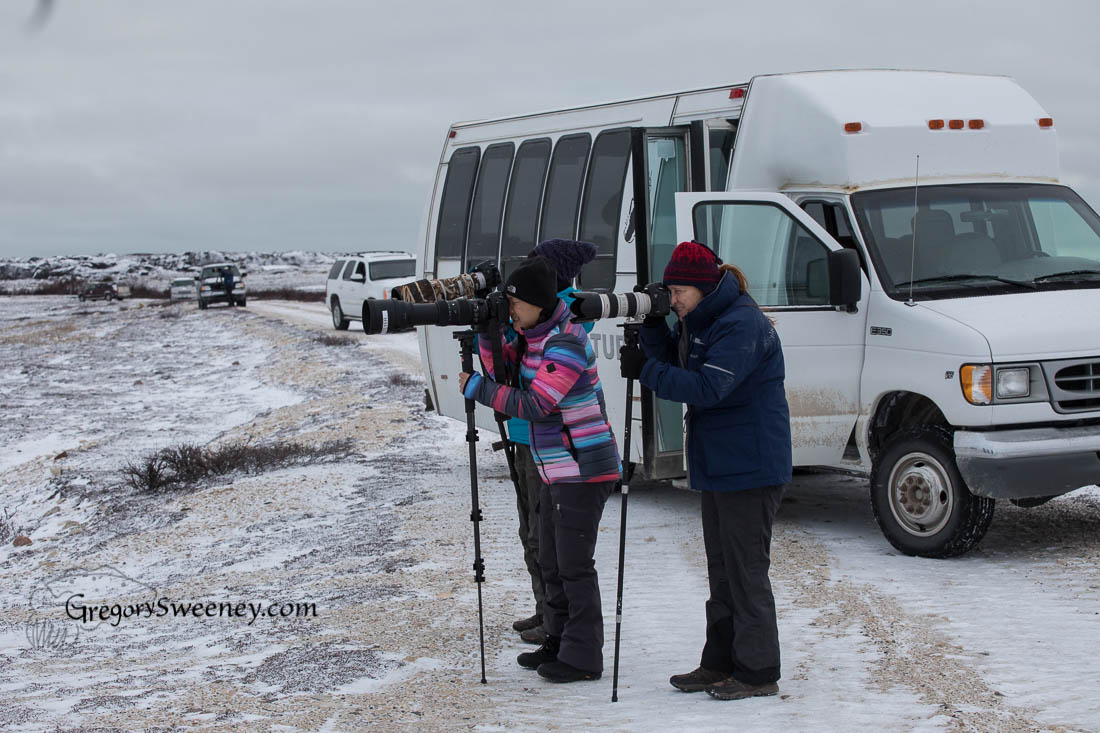 Our next day was spent on a specialized bear tundra vehicle in the Wildlife Management Area.  The vehicle was comfortable and had window we could photograph through as well has the big open back deck for unobstructed photographs.  They move slowly, but there is no other vehicle which can cover this territory without damage to the environment. 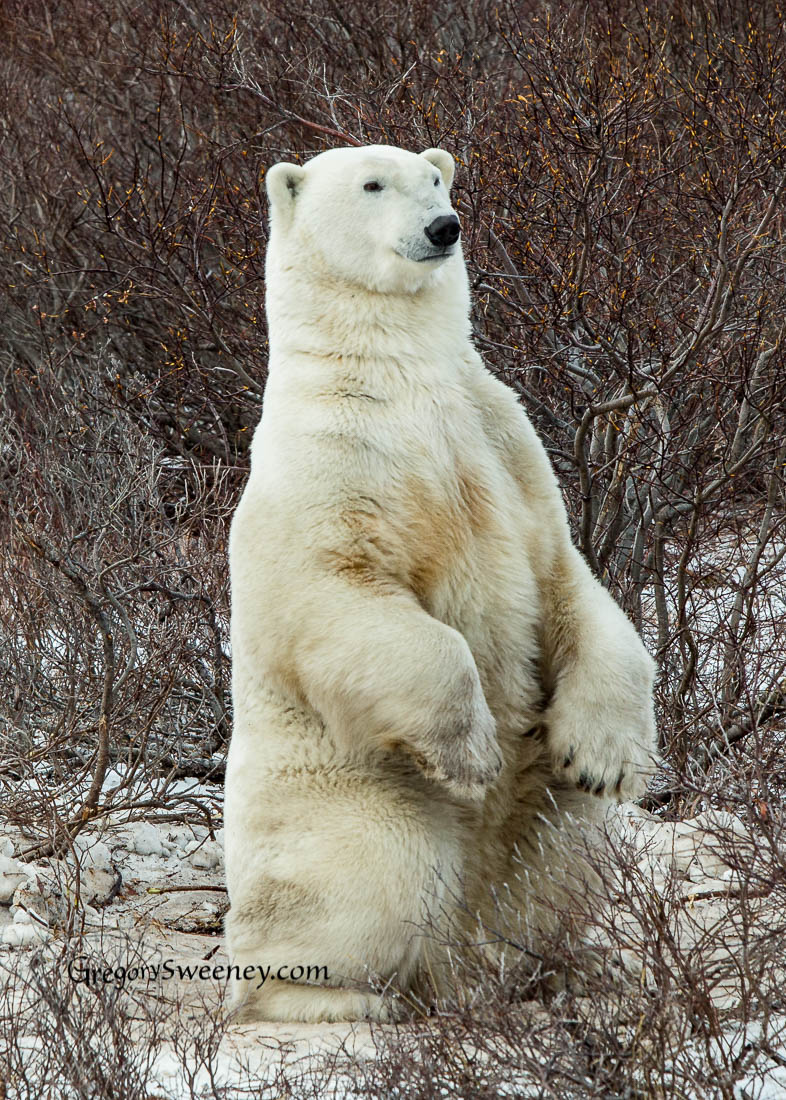 We had many bear sightings  in the bear vehicle.  We tracked a mother and two cubs for a long time as they advanced to a half frozen creek. Our best encounter was a male bear who took a nap right near our vehicle.  He gave us a great display while he rolled and rubbed.  He changed places and went back to sleep.

An arctic hare whose size was surprising gave a good photo opportunity before bounding off. We also found several snowy owls.  Many of the sightings were due to the expert spotting skills of our driver and guide – they knew where to look and positioned the vehicle for great views.

Our 2nd night was clear and we were treated to Northern Lights early in the evening.  It was cold but worth the bundling to set up our tripods and cameras to try to capture the magic of the lights. 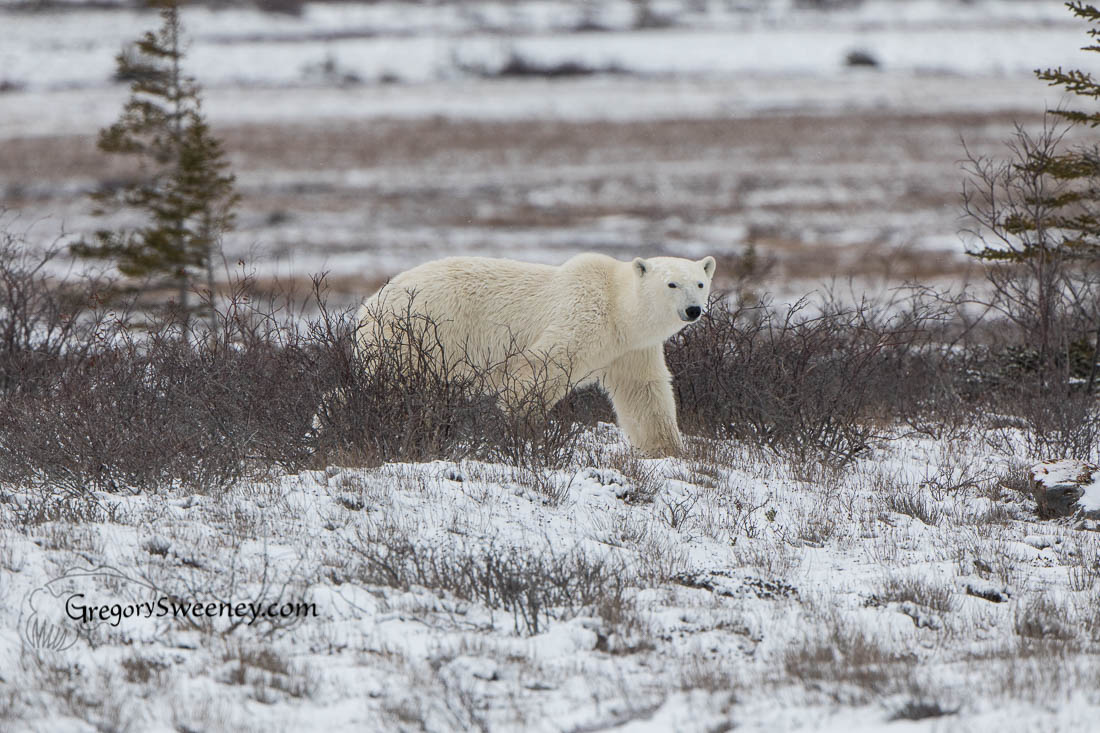 On our last day we were back with our private van and guide.  We had a great encounter with a male bear who was walking toward our van then crossed the road right in front of us then kept going into the rough. We are able to get out of the van and use tripods.  When the bear went out of range, we changed course to intercept it down the road.

We had several more snowy owls, ptarmigans, and a fox this afternoon.  Our last encounter of the day happened as the weather turned to blowing snow. A young bear was lying down near at the quarry.  He looked sad as if his mother would not let him follow her anymore.

Our day ended in town at a restaurant and then straight onto the airport and our flight back to Winnipeg. 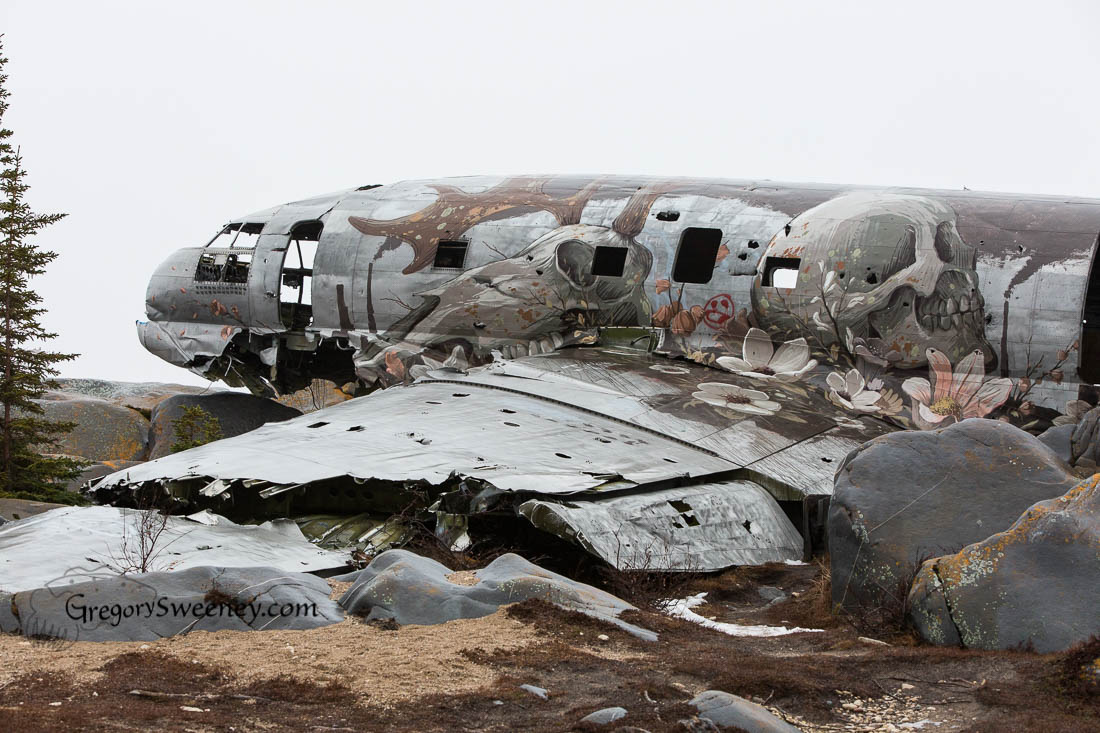 It was a great trip full of great chances to photograph polar bears and wildlife.  We are grateful for the opportunity to stay at the Northern Studies Centre for a quality yet affordable trip packed with wildlife and photography.

Get information about our next Polar Bears in Churchill Trip